Pinnacle Diary has been a long time customer of Munters going back to their first farm 15 years ago. They began with Vortex belt driven fans and have expanded their use of Munters products ever since. Over the years Pinnacle Dairy has also acquired existing dairies with other equipment already installed allowing them to experience the difference in quality and reliability between Munters and its competitors.

“It’s hard to justify the person that it takes to change belts and grease fans on that size of a project. So when you can eliminate that for them, they really jumped on that,” said Jonathan.

Additionally the project package will include 100 AX panel fans and an Extended Height CT Evaporative Cooling System. Jonathan went on to say that Pinnacle Dairy likes the Munters service;

“They know we design our projects like they should be done. We don’t cut corners. We say what we’re going to do and do what we say.”

“There’s really no other investment you can make on equipment or anything on the farm would see an ROI that quick,” said Mr. Chalupa.

Variable speed is where you see the energy savings. Even when running at 100% you still see an eight to ten percent energy savings compared to a belt driven fan that is just on or off. By turning fans on in groups set at 30% and then increasing the speeds together, the barn is able to maintain a consistent temperature and increase ventilation quicker and smoother while maximizing the CFMs per kilowatt hour. 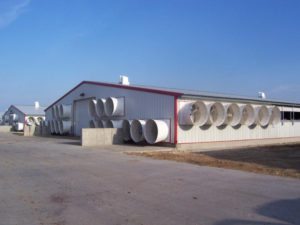